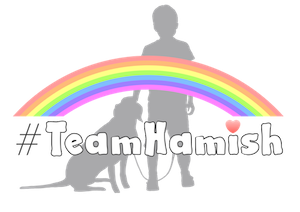 We have been moved by this story and are performing next Saturday in Nairn to support it. Tickets availableSCOOTY & THE SKYHOOKS PERFORMING IN NAIRN #TEAMHAMISH Hamish Hey’s journey began in June 2011 when he was just 2 years old. His first diagnosis was a metastatic alveolar rhabdomyosarcoma – a rare and aggressive soft tissue cancer. Hamish underwent months of gruelling treatment, comprising intensive chemotherapy and radiotherapy, together with a pioneering surgery called a rotationplasty, resulting in him having a prosthetic limb. During the following few years Hamish miraculously fought on, living life as best a little boy should, but with regular checkups and extensive routine medication, primarily to control the longterm side effects of the treatment. Then tragically, in March 2016, now aged 7, Hamish was diagnosed with a DIPG. An aggressive, inoperable tumour within the brainstem, for which there is no cure. This diagnosis was completely unrelated to that in 2011. He underwent 30 sessions of radiotherapy, but this treatment was only palliative to allow him a little more time with his loving family and friends. Hamish passed away peacefully in his mother’s arms at home on 20th February 2017. The #TeamHamish Charity has been set up in Hamish’s memory, to give back to Nairn and build a tribute to their son and the kindness the community of Nairn have shown the family. In order to raise some well needed funds for the charity there will be a fundraising gig taking place on 17th March at the Farmers Showfield, in Nairn. Tickets will be £15 in heated marquee with licensed bar and are available from The Red Cross Shop in the High Street Nairn Bridgemill Direct and the Auldearn Shop plus from private message from REVCT Rainbow ride concert Companies supporting the event and giving their time for free include: Scooty & the Skyhooks, North of Scotland Marquees, Limelight Event Services and Pat Munro. First aid for free and all security and bar staff are volunteers. Scooty & the Skyhooks: Scooty & the Skyhooks, an 11 piece soul and motown party band from Highlands. Performing since 1985 the band have supported and appeared on the same bill with artists such as Sister Sledge, Martha Reeves and the Vandellas, Jools Holland Rhythm and Blues Band, The Commitments, Runrig, Tom Jones, Big Country, Deacon Blue and Texas to name but a few. Scooty and the Skyhooks have enjoyed recent sell out gigs at The Ironworks, Inverness as well as playing the main stage at several festivals ,events and corporate gigs around Scotland including their 2016 performance in front of 10,000 at Inverness Hogmanay party. They will also be special guests of Billy Ocean in his first appearance in Inverness. Their upbeat songs and huge party atmosphere was wowed crowds across the region for many years and have been titled by website Inverness Gigs as “North of Scotland’s most popular band ever”.